Written by Don Amador on 06 April 2009. Posted in The General's (aka Don Amador) Recreation HQ.

Saved By Zero - 24 Hours of Electricross

Saved By Zero - 24 Hours of Electricross 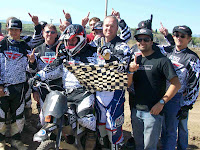 Now the question can be asked another way…”If there is an all electric dirt bike race, does it make a sound or a noise?” After attending the 2009 24 Hours of Electricross and taking some sound measurements at the starting line and at various turns, the “tree falling” could now be replaced with “electric OHVs” in that famous question.