Hello guys,
I was visiting with JohnnyB the other day and we had a conversation that was about fuel mileage and that you could get a little more if you had a lockup torque converter. Last night we were trying to narrow down which year vehicle has these T.C. but could determine it.

Does anyone here know what year donor vehicle I should be looking at to get a lockup torque converter?
Posted By: Jay Ayala

Found the answer by searching some old threads in the Mitsubishi Tech section.

OK, Mitsu. went to a "lock-up" converter in 'mid year' of 1990. To identify a lock-up vs. a non lock-up, you need to look at the 4th letter on the transmission case (which Mitsu. lists as model V4AW2). If the 4th digit is;
N = Non- lock-up converter
P = Lock-up converter
The serial number has 9 digits and is located on the left side (drivers) of transmission. It's riveted on to the transmission.
They call out the parts that are NOT INTERCHANGEALE as;
Torque converter
A/T oil pump body
Oil Pump inner gear
Oil Pump outer gear
It goes on to say that many parts are interchangeable.
Posted By: off-roader

Yes, this would be for the 3.0L V6 engine.
Posted By: TOASTY

Interesting side note, the USDM Delica got fuel injection and a lockup torque converter in 1987. Had they put that combo in the Montero and Mighty Max as well back then we'd have probably thousands more on the road today.
Posted By: Jay Ayala

Here is a link to the thread I brought up earlier. It's the original lockup torque converter thread.

Has anyone documented how they did this upgrade on a Gen I? I'm specifically interested in a write up and some results. If not I'll plan on doing it myself.
Posted By: Jay Ayala

I spent a few hours at the junk yard over the past couple days extracting the Torque Converter and the Automatic Transmission fluid pump assembly. I'm freaking sore in wired parts of my body. I didn't know that my Achilles' tendon could get sore. Damn.

I have to find a weeping oil leak on my engine so I'll be pulling it out pretty soon. I'll install that torque converter and the other parts at the same time. I'll be deliberate on how I document this.
Posted By: FrankR

Jay, I did that swap a few years ago with a complete transmission. Before I installed it, I completely rebuilt the transmission. Somewhere in the rebuild I made a mistake, which caused me to have it professionally rebuilt. After that, there were no issues with it, but I had a slightly different sort of 3.0L.

The main advantage of the lockup torque converter is better fuel mileage, but it might be at the expense of a smooth power curve through the gears on acceleration. Where the non-lockup torque converter allows the engine to maintain revs during the shift process to build momentum in the next gear, the lockup converter eliminates that and clamps down at the shift. I sensed that a naturally aspirated 3.0L might have a flat spot as soon as the shift occurred - mainly because my engine often went into boost at the shift to main power demand from the throttle setting.

It's entirely possible that the Diamante cams I was using also contributed to the issue for me. The truck cams may work just fine with the lockup converter, since there is more low rpm torque with those than what I installed.
Posted By: monte

Yes, both Kevin and I put a V6 lockup transmission unit in our Turbo 2.6 vehicles. But you are looking a journey ahead.

I wrote up a thread on here called "my transmission swap from hell" <img src="/forums/images/graemlins/lol.gif" alt="" />

You are going to need the bellhousing, lines, linkages, cooler. wiring (or make your own custom for the OD) shifter, etc,etc.

Fun stuff.. ohh yeah.. and it sucks alot of power! If you are interested... I'm thinking about ripping my setup out and putting back in the 5sp!!

Here's the link from back in '11... I'll see if I can get the pics up and running again!
Trans Conversion from Hell!!
Posted By: jeepfreek

I just had my lockup torque convertor rebuilt at Superior Torque Converter in PDX. The say the thrust bearings are a weak spot in them and are replaced as well as the clutch lining during rebuild. Cost was $190 with a 3 hour turnaround time! I haven't been able to put much time in my 91 Monty lately. I was hoping for a Memorial Day assembly, but things keep getting in the way.
Posted By: monte

Also, to anybody who wants to do this... you just can't go and put a "lockup" converter in a standard auto trans. You have to get a KM-148L unit or the magical 372L unit!
Posted By: TOASTY

I liked the non lockup better in town because it spooled up quicker but the lockup was better on the highway. Anyway after that experience i've decided that when it comes time to auto swap my Mighty Max i won't pass on a non lockup, i'll just take whatever i find first.
Posted By: Jay Ayala

Thanks for the replies guys. I appreciate it. monte, what an epic battle with the tranny brother. Talk about perseverance, way to go!

From my preliminary research I've come to the conclusion that I need very little work to perform the Lockup T.C. upgrade. I'm in a bit of a different situation from monte and KevinC. Where they did this swap for a 4 cylinder turbo setup, I'm doing it for my 1989 6 cylinder AutoTransmission. I won't have to go through the trouble of swapping transmissions, I think I'll just need to swap out a few parts. I'll run through it now with you.

This is a screenshot taken of a technical service buliten sent to me from BigBlue. There is a line in there towards the bottom that specifies the non-interchangeable parts between 1989 & 1990 torque converters. This is why I believe I'll only need to swap out a few parts as opposed to a whole transmission. 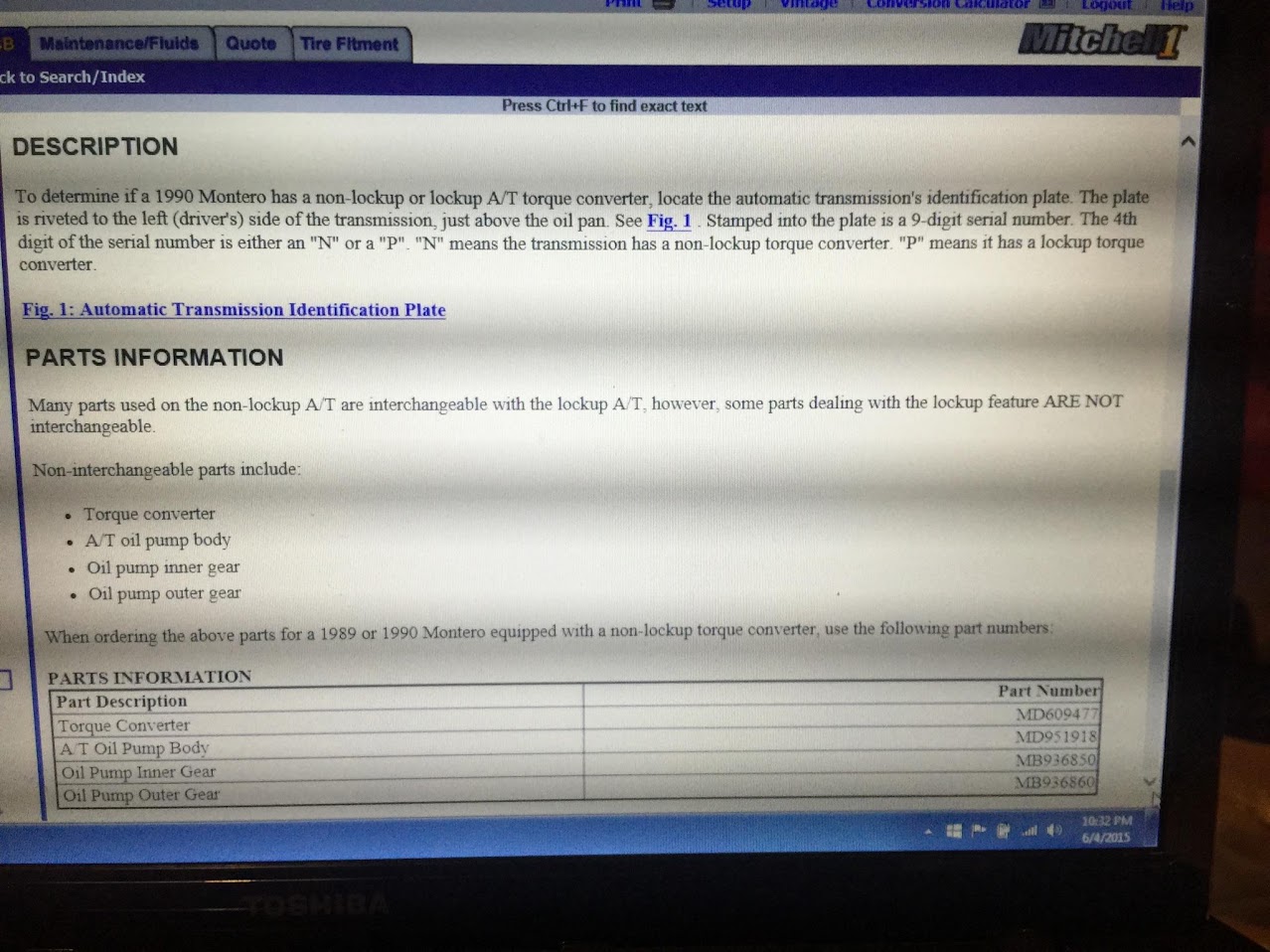 You need the valve body from the lockup unit. The lockup function has its own, separate circuit. The feed line is not found in the standard valve body. When I first did this swap, I confirmed that the case was the same.

My memory is a bit fuzzy, since its been 10 or so years since I did it. The special valve body times the lockup to come in after OD is engaged. Its an extra circuit and the standard body I looked at did not have it.

Also, the factory manual from that era show the circuit, but it was not in the actual non lockup units. Basically, the manual is wrong.

10 + years is a long time. but that's what I remember.
Posted By: Jay Ayala

Thanks for the Feedback KevinC, I'll have to go do more research on this and document what I find. I'll keep you guys posted.
Posted By: Kevin C

I had some time to think about my swap.

1: The valve bodies were definitely different. My 1987 valve body did not have the extra valves to control the lockup converter.

2: The cases were identical.

Looking at this as critical thinking exercise, all I proved was that my 1987 4 cyl auto does not have the correct valve body for the swap.

It's possible and reasonable that the extra valve does nothing and hurts nothing so it could be in there.

Most manufacturers roll a change in all at once. So it seems unlikely they would just put a new valve body in and not the other lockup parts (including the different ratio gear set). You never know, you might get lucky.

How can you tell? The lockup valve body uses a different filter. If you go to sites like Rockauto, you should see two choices for filter screen in 1989, one for the lockup unit and the other for the standard unit. Still... Kind of confusing.

The above guide should help. The filter on the bottom left is whats used on the A44DL AKA the lockup unit. If you don't have that filter on your valve body, you don't have the right one for your lockup converter.
Posted By: Kevin C

Lockup Valve Body from my swap with the valves labeled. One thing to note, the lockup of the converter happens after the unit goes into OD, it's a staged event. It takes a couple of seconds to happen and is the reason why the lockup unit has the extra valves.
Posted By: Kevin C

I liked the non lockup better in town because it spooled up quicker but the lockup was better on the highway. Anyway after that experience i've decided that when it comes time to auto swap my Mighty Max i won't pass on a non lockup, i'll just take whatever i find first.

I had the stator modified on my converter to allow a bit higher stall. Quick spool around town and lockup on the highway.
© 2021 4x4Wire TrailTalk